August 03, 2006
It's hard to take a good picture of Skenderbeg Square. Even professionals struggle to give it any depth or vitality. There are parts of the Square that are photogenic - the Skenderbeg statue, the Et'hem Bey mosque - but taken as a whole it lacks definition.

Empty on the West side, scarred by two communist era monstrosities to the North and East, only the view to the South pleases - with the combination of the mosque, the statue and the government buildings.

It's no surprise that politicians, architects and urban planners have tried to come up with a redevelopment scheme for the Square. Following an international competition in 2003 commissioned by the Municipality of Tirana the plan drawn up by Architectural Studio - a French company - was chosen as the basis for Tirana's long term development.

It's an ambitious plan envisaging the redevelopment of a huge section of the city, with the Square at the centre. You can get an idea of the scale and amibition of the plan from the Architecture Studio website. Just click on 'Diaporama' for a series of images of how this new Tirana might look. One of the images is reproduced below.

I'm not sure what the proposed timescale is for implementation of the entire plan, but early last year a Danish studio, Henning Larsens Tegnestue (HLT), won another competition to select a group to begin the process. HLT submitted a plan based on the redevelopment of Skenderbeg Square. It's centrepiece will be a 26 story tower called 'Eyes of Tirana' which will stand on the empty West side of the Square.

The HLT website provides illustration of the tower and its relationship to the rest of the Square. Unfortunately the HLT site is one of those annoying flash sites that look good but are not entirely practical. From the menu select projects. The Tirana Tower is the second image from 2005. For those who are interested in more detail, you can have a look at HLT's competition proposal. The images below are from the HLT proposal. 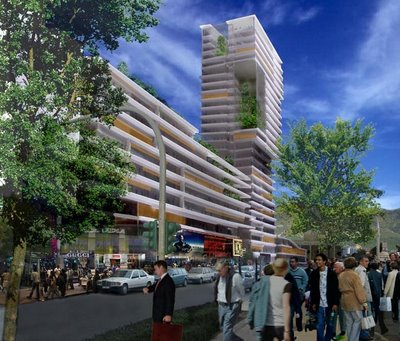 The HLT site suggests that the project will be implemented from 2005-2007. As yet, however, I can see no indication of construction work on the proposed site. Given that the project would be very expensive the city obviously needs private investment to make the proposal a reality. Raising the money may prove a greater challenge than raising the tower.

ITS said…
They all look great. Anything is better than nothing. And let's hope this time that with changing regimes, they won't be tearing the buildings down over and over...
8:09 pm

Mërgimtari said…
Do any of you natives know if palm trees are native to this part of Albania?

In my opinion, they should plant local trees and try as much as possible to tie the architecture of these buildings in with native styles/mediterranean architecture.
9:07 pm

For more information on more projects check this site below.

Palm trees grow pretty well in Durres, not a whole lot in Tirana but considering that in a straight line Tirana is only about 30-35km from Durres then I think they'd survive there.
4:45 pm

Anonymous said…
I know the investor of one of this buildings. Sorry to dissapoint you guys, but he is a dirty guy who is trying to clean the money in the building. May be not the only one. Don't look behind the fasade, you may get a depression!
8:25 pm

ITS said…
Un utilisateur anonyme a dit…
I know the investor of one of this buildings. Sorry to dissapoint you guys, but he is a dirty guy who is trying to clean the money in the building. May be not the only one. Don't look behind the fasade, you may get a depression!

Oh my, a dirty investor!

Kind of like Enron and Halliburton in the USofA, or was it Parmalat in Italy?

Let me give you a reality check. Behind big money, there is always dirt, no matter where you go in the world. Albanians are learning for the best, and they are at the very early stages of this dirty game, we call business.
5:05 pm

Anonymous said…
hi, are you interested in link exchange with this site: http://www.stupid-ideas.blogspot.com/ ? i want just a link, you can have many :)
5:27 pm

Anonymous said…
I am talking about drugs, its. You too? Why I have the impression that your steroid levels are quite high, as high as to make you qualify for a kalashnikov?
9:44 pm

nursery plants said…
There are many wholesale perennials that can add to the beauty of any place in a few months, if due care and attention is paid while choosing and growing them.
5:33 pm