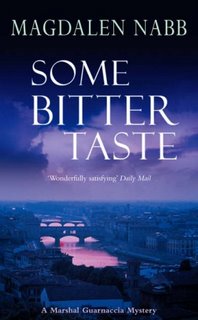 Magdalen Nabb is an English crime writer whose novels are set in Florence and feature Marshal Guarnaccia of the Carabinieri. In Some Bitter Taste, first published in 2003, a number of Albanians play central roles in the story.
Dori is a prostitute: "She was a fabulously good-looking girl...She could surely have been a successful model if she'd had the luck to be born somewhere other that Albania."

Ilir is her protector. His money "paid the exorbitant fee that brought her across to Puglia, wet and starved on a rubber dinghy."

Ilir has been arrested so Dori and Ilir's other girls are now working for his cousin Lek. Lek's main business, though, is his building firm which he runs from a local apartment:

At any given time there might be up to eight Albanian immigrants living there. Lek Pictri's scam was to take these men in and register them with the police as employees in his building firm, which existed only on paper. As fully employed, though illegal immigrants, their status was legalised and they were given police permits and residence documents. Once they obtained these, they soon moved on - to contacts of the Pictri cousins, usually to a profitable life of crime - leaving space in the flat for new arrivals. Nobody knew yet what price they paid for this service but it was suspected to be part of a countrywide network which controlled the costly and dangerous journey from Albania and this legalisation process, and trade in prostitutes and drugs.

Enkeleda is another prostitute, recently arrived. When the police move in to search Ilir's apartment, a neighbour reports the sound of a young girl's screams. As the police break in, Ilir disappears out of another exit with Enkeleda. A car chase ensues. As Ilir makes his escape, he opens the door of the car and pushes the girl into the road, where she is struck and seriously injured by a pursuing police car.

The narrator intervenes at this point to reflect on the indifference of Italian society to the fate of young women like Enkeleda.

The story of the girl thrown out on the motorway, given that she was just another Albanian prostitute and not even dead, warranted only a small paragraph in the local news pages...It had happened too often and those not working actively against it reacted to it no more than to the dogs who would meet a similar fate.

Elsewhere, the narrator tries to fashion some kind of response to that indifference:

It was easy to say as people generally did, so as to ward off any passing discomfort the fate of these Albanian girls might possibly provoke, that they knew exactly what they were being shipped over here for and what dangers they faced...The trouble with this comfortable idea was that people, especially inexperienced youngsters, think themselves capable of anything to escape dead-end poverty.

Yet not everyone is so harsh in their judgement. As Enkeleda lies in hospital, a fellow patient, Marilena, who knows Enkeleda's background and story, treats he with compassion and kindness.

Later, the Marshal's boss, Captain Maestrangelo, adds his own reflections following the incident on the motorway:

The problem's too big and the worst of it is, everytime something like this happens, racism increases a hundredfold. We've got law students from Kosovo working as builders mates, teachers scrubbing floors, a displaced workforce doing all the dirty jobs we Italians don't want to do and they'll never hit the headlines. They're invisible. People only know about theft and prostitution and episodes like the girl thrown out of the car.

One of those invisible people is central to another part of the plot. Gjergj - or Giorgio as he is known - escaped from Kosovo and arrived in Italy as an illegal immigrant. A medical student, he works as a secretary for an eccentric and frail Englishman, Sir Christopher Wrothesly, in a house full of antiques and art works.

Sir Christopher does not know it, but his senior staff and advisors are emptying the house of its treasures without his knowledge. One night, though, Sir Christopher watches as his possessions are taken from the house and loaded on to a truck. But it is too late. Sir Christopher collapses and dies where he is found by Giorgio.

The conspirators decide to make it look as though Sir Christopher died in his sleep. Giorgio is to be the main witness, encouraged to co-operate by threats to his tenuous status. Scared, Giorgio plays along, but he is a decent and honourable man who, alone among the staff, liked and respected Sir Christopher. Prompted gently by the Marshal he tells the truth, no matter what the consequences.

Even though Giorgio does not conform to the criminal stereotype, he too has encountered prejudice and suspicion in Italy. The housekeeper thinks he is a thief, so do some of the gardeners. "I heard one of them say I was Albanian and Albanian is just another word for thief."
Again, though, Giorgio, has also met with kindness. It was a policewoman who advised him to seek out Sir Christopher, rather than try for asylum, in order to stay in Italy.

As the story closes, Enkeleda is being cared for at a home for damaged and distressed children; Lek is still free but the police are closing in; Ilir is out of prison and Dori has gone back to him; Gjergj - Giorgio - has disappeared.

On the one hand, Nabb's book has the full cast of stock Albanian villains - prostitutes, drug-dealers, traffickers, violent gangsters. On the other hand, the narrator and some of the other characters try to understand what drives some of those people and to see the criminals as only part of a much bigger picture. And, apart from the Marshal himself, it is the Albanian, Gjergj, who is the most sympathetically drawn character.

The prejudices of the host society are acknowledged as well, though there is no blanket condemnation. Yes there is prejudice, suspicion and indifference, but there are also acts of decency and kindness.

While Nabb tries to draw a more balanced picture of Albanians in Italy than is often the case, the difficulty is that the general perception of Albanians is so unbalanced. Consequently, it is relatively easy to reinforce a negative perception, but much more difficult to create a more positive one. Nonetheless, at least Nabb has tried to move beyond the role of Albanian as stock villain.

Anonymous said…
A few months ago an Albanian saved a woman and her child from a burning building in Florence. The newspaper portrayal of this?

Translation: For one (more) time we'll forgo privacy. His name is Edmond Doci, he is 21yrs old and Albanian. It is pointless wondering about this; the emigrants from the Land of the Eagles don't enjoy a good reputation"

So even in an article about a person endangering himself to save others the Italian paper found a way to smear all others. When he received letters of protest he din't retract his portrayal, insisting it was true and accurate.
3:54 pm

ITS said…
That's a fascinating story.

Great piece of literature launching the Albanian people into the EU.

This Magdelen chickie should be nominated for the Nobel prize in Literature.
4:16 pm

© DAI - 2004-2014 said…
Your blog, Alwyn, is an invaluable source of info. with pics to boast about! Thanks for every bit of it, which provides me continuity in my link to the beloved land of my origin during the times I can't be in it.
4:31 pm

olli said…
Dai and Byqtis - my pleasure and thanks for your words.
2:26 pm