February 25, 2007
Did I say no more election postings? Well, perhaps one more.

One week on from the elections we are still waiting for the final results. The process of counting has been incredibly slow - in many cases this seems to have been a deliberate ploy. It was only when counting got underway that the most serious incidents to date took place.

In Ndroq, in the Tirana region, I watched Lajme 24 broadcast pictures of members of the counting commission throwing chairs, tables and what appeared to be a hat-stand at each other. Two were hospitalised, four were arrested and one was sentenced to fifteen days in prison.

In Bushat, in the Shkodra region, there were also disputes, though without the violence. The opposition are demanding that the election be rerun.

In Himara, there was large and disruptive crowd outside the counting centre where accusations were flying. Himara is the major city of a region which has a sizeable Greek community. The Greek party, PBDNJ, was accusing the PD and PS of working together to ensure the defeat of their candidate.

In Tirana, there were many problems in the Kombinat area and in unit 10. In the latter, a very close race for mayor led to both candidates accusing each other of having their friends and family in the counting centre, and even counting the votes. Eventually the PS candidate was declared the winner and the PD candidate threatened legal action.

A few days ago, Nard Ndoka, leader of the PDK, announced on a television programme that the PD had tried to persuade his party to help the PD defeat the PS in Gjirokaster and Elbasan.

Despite all this the results have been rolling out slowly. The three I was most interested in were those for Tirana mayor and the two results from Kamez.

In Tirana, Edi Rama is back for a third term. In the end he defeated Olldashi quite comfortably - roughly 55% to 45%. As well as being back as mayor, Rama's victory should also strengthen his grip on the PS. He only became leader after the election defeat in 2005 and had not been tested electorally before.

In Kamez, even though the CEC website has not yet posted the result, I don know that the PD candidate defeated the LSI candidate. I do not yet know the make up of the council.

The slow pace of the vote counting and the problems seen in some regions led to interventions from both the CEC and the President. The CEC issued a statement on Tuesday:

Central Election Commission has followed closely and with great concern the situation concerning the conduct of the election process. I emphasize again that the election process does not take only one day, but it is finalized with the end of ballot counting and once the documentation has been delivered correctly, in compliance with the law, to the respective LGECs. The negative phenomena of blocking the ballot counting process are not only illegal, but they also have a serious impact on the entire electoral process and the image of our country. On Monday, the Commission seriously considered the present situation and reacted vigorously by ruling decisions to unblock created situation in some of the big municipalities. But on Tuesday the situation was aggravated again in some other local units.

The President issued his first statement on Wednesday, noting that, "the post-period of administering the results was accompanied by unnecessary shortcomings and incidents that stem also from the behavior and intervention of politics." This was followed by another statement on Saturday:

The President of the Republic, Alfred Moisiu once again appealed to the political parties to be seriously committed for the legal conclusion of the electoral process and at the same time to demonstrate self-restrain and high responsibility.President Moisiu also demanded from the Central Election commission and Electoral Panel to be correct in implementing the law.

Meanwhile, both party leaders have been declaring themselves victors. Prime Minister Berisha appeared with a map of 'blue Albania' marking all the regions were the DP had been victorious. He was able to point out that the map was mostly blue - which was true. 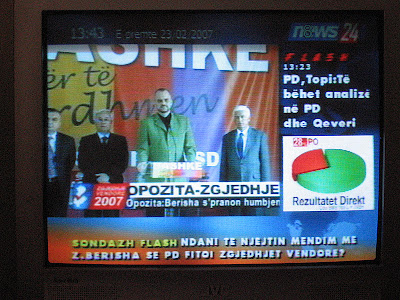 Rama and his supporters pointed out that almost all the major centres of population had voted PS - which was also true. For those who like number crunching you can find statistics on turn out and party support on the CEC website and decide for yourself.
Unfortunately for Berisha, he seems to be the only one who thinks he won. Some of his own political allies are calling for changes in light of the result, including Fatmir Mediu, leader of the PR and Defence Minister. Worse still, Berisha's rival in the PD, Deputy Chairman Bamir Topi, is also demanding changes.
On the left, their victory seems to have reawakened their dreams of an early general election, with LSI leader Ilir Meta in particular appearing to talk it up. Yet the only way to force an early general election is to deliberately manipulate the forthcoming presidential election, either by opposing any candidate or by boycotting the vote.

Given the criticism the political parties have received for their negative and confrontational approach, and given the generally critical comments on this election, this seems a particularly stupid route to go down.

In threatening to try to force Berisha out of power, all the socialists demonstrate is that despite all that has happened in the last few weeks it is back to business as usual in the world of Albanian politics.

Anonymous said…
Accurate analysis Alwyn, thanks! You've become quite fluent in Alb politics :-)
I agree with you that as far as political culture, Albania is still far from Europe, however culturally otherwise, of course it is part of the big European mosaic.
Unfortunately, I fear that it will probably take a generational change, to see the old conflictual mentalities off Albanian politics.
5:53 am

Ll.T. said…
What do you say Alwyn, should we sue so that we can get paid; you for your work and me for the translation? :)
5:58 pm

olli said…
Thanks for letting me know about this. I would not have found it.

It would be nice to get paid but I won't hold my breath.

james said…
Hehe. Pirate shqip. I get it.

Sometimes it's the simple things. Oh and congrats on your "published" work.
11:03 am

olli said…
Thanks James. Now I'm a celebrity I would be willing to come and do some talks for you. I think you'll find my fees are very reasonable.
11:16 am