February 07, 2007
I grew up in an conservative evangelical Baptist home. We didn't drink alcohol. Ever. People I knew referred to alcoholic drinks as 'the devil's buttermilk' or, more graphically, 'the devil's vomit'.The fact that Jesus drank wine, to the point of being accused of being a 'winebibber' - great word that - and a 'friend of publicans' (Luke 7.34), was only a minor stumbling block.It was variously argued that the wine Jesus drank was non-alcoholic, grapejuice, watered to the point where there was almost no alcohol or that he alone had special authority to drink wine.It was all fairly unconvincing and somewhere along the way though I stayed Baptist, even conservative - I prefer to say orthodox - I started to try the odd drop myself.Now, as well as our home made raki and my collection of malt whisky, beer or wine is the normal accompaniment to dinner. It used to be beer almost exclusively - I am from a land of grain rather than grape - but the selection in Albania is not great and there is only so much Heineken you can drink. There are some local beers but they tend to be of the fizzy lager kind.Now, I drink wine more often. Albania makes some good red wine, less good white. Ordinary reds can be fine - but then again they can be awful. You notice this difference in the quality of everyday wines when you open up a bottle of Chilean or Australian or French wine.Red is more popular than white - restaurants in Tirana sometimes seem at a loss as to how to serve white wine. It is rarely sufficiently chilled and, without naming names, the worst wine I have ever had was a house white at a local restaurant that tasted like fizzy vinegar.The good news is that our beer options are slowly improving. It is possible to buy some decent bottled beers if you look around - Pilsner Urquell, Newcastle Brown, even Leffe.There are a couple of places that do Newcastle Brown on tap, and these have now been joined by a fine little bar in Rr. Brigada called Flares where I took the picture below. 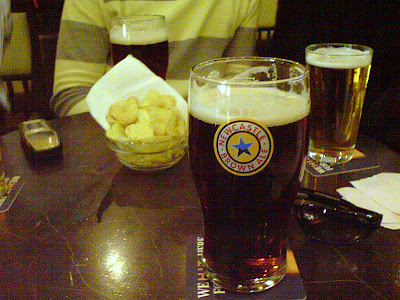 Newcastle tastes a little sweeter than I remember - closer to Bass - and, of course, it is not a patch on Marston's Pale Ale - probably the best Ale in the world, as the Danes might say. Still, it is nice to have more options.If anyone out there can recommend any good Albanian wines let me know. I'll be more than happy to try them out.Gezuar.

Miss Kim said…
A timely post Alwyn! Peter and I were just discussing Jesus/Christianity and alcohol on the weekend and we were wondering about the story we were always told that he drank grape juice not wine. If it wasn't wine why call it wine then?

As for Albanian wines, I agree that the reds are often highly drinkable. The problem I have is that they are soooooo often served cold- as if they have been kept in the fridge. This really irritates me! But then I think sensibly and understand that with the hydro situation as it it, most places don't have much heated storage space for their wine collections. Then I just cradle the wine glass in both hands until it is not quite so chilly.
1:06 pm

Marco said…
Hi,
regarding beers, last saturday i went to "Take five" pub (in front of american embassy) and I found also Newcastle Ale and the stout Beamish. I guess you will be happy to know it!
On friday and saturday there is also jazz live music to enjoy!
1:12 pm

Anonymous said…
I'm hoping that if I ask for a "light" beer every time I go out, eventually some bar in Tirana might start a new trend. Such an American I am!

Timothy was also told that a little wine was good for his stomach...
2:09 pm

Adela_Radu said…
I have been wanting to do a post on Albanian wines for a long time and maybe I will at some point. You are right when you say that the wine in the Bible was actually wine. It is interesting how in Baptist circles they come up with all these theories how it could have not been wine. I have heard them go as far as saying that the word wine used in Greek does not refer to the juice that comes from fermented grapes.

Now to the Albanian wines, I think you are doing both the Albanian wines and the French and Australian wines a disservice when you are comparing them. Australia, France and Chili make classical wines (shiraz, cabernet, merlot, etc.), Albania on the other hand tries to copy these ones without any luck. Having said that, I am not saying that Albania does not have good wines. We do, but they are really region specific. Just like the Georgians have their very specific wines or the Hungarians, so do the Albanians. Here are some very specific Albanian only wine varieties: Kallmet, Serine, Shesh, Vlosh, Debine. I am not saying that you will like them, but at least you will have tasted some real Albanian wines. :) I am trying to do a project on Albanian wine and have consulted the Sommelier Organization in Albania, and they have recommended the wine from the following companies: Kantina Miqesia (Malesi e Madhe), Kantina Arberi (Mirdite), Kantina Skenderbeu (Durres), Kantina Cobo (Berat). I am not advertising them, but so far these are known as the only wine making facilities approved by international standards and plus the wines are made out of Albanian grapes. A lot of the other wines that you might see in the market are made with grapes brought from Macedonia and the standards are somewhat suspicious. I don't mean the grape standards, but the aging of the wine is not done properly, and often times to earn a quick profit and bring it to the market as soon as possible other things might be added.
3:25 pm

olli said…
Hi Kim. We will see how they do tonight at the restaurant.

Marco, I know a lot of people who have been to Take 5 but as yet I have not managed it. I'm not overly fond of Beamish but the jazz would be fun.

Llukan - thanks for the suggestion. Some local friends are trying to arrange a weekend in Pogradec in the spring so I will look out for it.

A&R - thanks for all the information. I will look out for some of those names in the shops and restaurants. I look forward to your post.
3:56 pm

Anonymous said…
Kallmet used to be a good red wine in the communist times. It was usually served to the foreigners. From the list of Adela and Radu I have tried last year sheshi i bardhe (i Cobos ne Berat). It is really worth it to try. It is not exellent, but it is good.

As for cooling down the red wine in the fridge, this may be due to the lack of wine culture of our albanians. We treat it as if it was water. Wine has never been as important to us as it is in west europian countries. Raki has been and it is still a very dominant drink.
3:59 pm

Fernando Olmos said…
I am a current blog reader. I love doing it. I saw a website with Albanian links, included yours. Then, when I hit here I watched your comment about wines and alcohol drinks. I'm very groundbreaking & surprised because there's chilean red wine thereabout.

I'd really like to know which levels are available in your zone. Sorry, I've forgotten to tell you I'm Chilean.

I have to go,
My biggest greetings from Santiago de Chile,

Fernando Olmos said…
don't forget to visit my blog at

Anonymous said…
Albanians are not huge wine drinkers that's why you dont see a strong established tradition in wine growing and consuming as compared to let's say Italy. Kallmet of Shkodra is a good quality wine however the best wine region in Albania is Mirdita. There's this red wine that starts with the letter "M" forgot the name.
And if you want a little rakia the best rakia in Albania is made in Skrapar.
The best beer is Birra Korça.

Anonymous said…
You can try the Kantina Arberi wine (Kallmet variety), has won many prizes. Lately posted their website on http://www.kantina-arberi.com