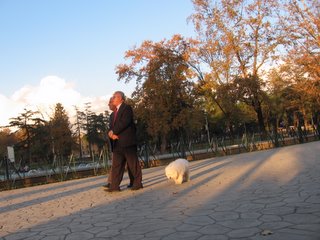 One of the better spots in Tirana to sit and watch the world go by is Rinia Park in the centre of the city. It wasn't always that way. During the free for all of the post-communist era the park disappeared under dozens of illegally constructed restaurants, cafes and clubs. It was only in 1999-2000 that the municipality reclaimed the park, demolished the buildings and redeveloped the site.
As well as re-establishing the green spaces and the pathways, and installing a complex of fountains the municipality allowed part of the site to be used for restaurant and entertainment complex called Tajvan (that's Taiwan for us English speakers, but don't ask me why). The complex houses a nice Italian restaurant - Casa di Pasta - a cafe, a bowling alley and a casino - complete with 'No Handguns' signs. 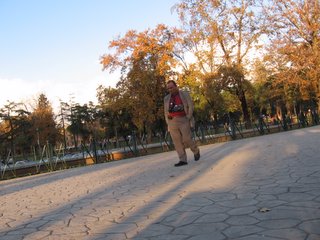 The novelty of having an attractive park downtown has given rise to a new business opportunity for some of Tirana's entrepreneurs. Photographers patrol the area ready to take pictures of passers-by against the backdrop of the fountains. At night both the Tajvan complex and the fountains are nicely lit and the photographers often work late since evening shots seem to be popular. Reluctant as I am to take work away from people earning an honest crust I took my own photographs - and they won't cost you a penny. 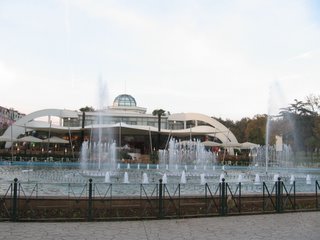 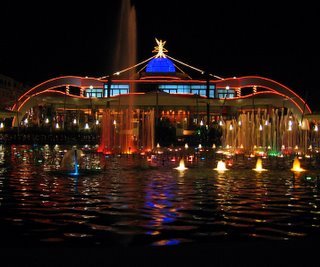 Anonymous said…
Well Edi Rama (Tirana's Mayor).
Tirana's people owe a lot to him. He (the Mayor) has worked very hard to change Tirana. Keep it up.
10:09 am

Joni said…
Taiwan :D! Taiwan has another funny story behind it. It finished construction during the Albania's communsit regime break with China. Since we broke with China we reckognized the sovreignity of Taiwan (being the first country in the world to do so) and named the new structure in the middle of Tirana... Taiwan in their support...
10:42 pm

Le Flâneur said…
I don't think the comment above is correct as the government of Albania still doesn't recognise Taiwan as a sovereign state. This can be seen in the webpage offer by the Ministry of Foreign Affairs of Albania. See they use Taiwan, PR of China instead of Taiwan.

besides, there are more than 20 UN member countries have diplomatic ties Taiwan, and Taiwan used to be recognised as the only legitimate government of "China"(so the official name of Taiwan is still "Republic of China") in the United Nations, and the US, Japan, Australia, though build diplomatic ties with China, had never denounce the recognition of Taiwan actively. You can see that in the Taiwan Relations Act passed by the US Congress. Nevertheless, it's still a surprise to know there is a place call Taiwan complex.(In fact ,Albania is the country that propose PR China(Communist regime) should replace the Nationalist regime(Taiwan, ROC), which later resulted in the lost of UN seat in security council for Taiwan(ROC). Notice that Taiwan(ROC government) used to be the five permanent seat of UNSC and one of the founder countries. this can be seen if you check the UN charter.
5:44 pm