June 14, 2007
Some of you may be under the impression that I earnestly patrol the streets of Tirana and scan the newspapers daily for interesting stuff to post here, with occasional dog-related diversion.

In fact, I spend a considerable amount of time sitting on the balcony drinking beer and reading detective stories. When I'm not doing that I'm often in restaurants, cafes and bars. On Monday afternoon I ended up at Floga with some friends. 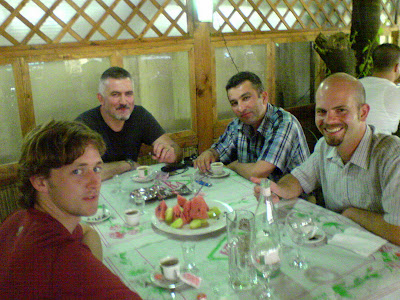 Ryan, Beni, Dritan and James
James, a Peace Corps volunteer we know, was in town for a few days. We met up and headed out for coffee. Just before we left I got a call from Dritan.

How about a drink later?

Sure, but I've got a friend with me.

No problem, bring him along.

At the cafe James called Ryan, another Peace Corps guy in Tirana for the weekend. Dritan phoned.

We're downtown - there's another guy with us now.

We met up. Introductions were made.

You want a drink? How about something to eat?

We made a few noises about something light, some salad maybe.

We'll go to Floga. They do good salads.

We got to Floga - that's it in the picture above - and Dritan ordered. Either he was ordering a very complicated salad or there was a lot more than lettuce coming.

Beer. A basket of fresh-baked bread. Salad. Grilled mushrooms. And then... inevitably...the meat plate. Previous visits to Floga had always involved the meat plate so I should have expected it. Always very nice though.

James and Ryan had to get a bus that afternoon so we started getting ready to move. Dritan paid for everything. I tried to persuade him that since I had brought along two other people he had never met I should chip in something, but it was futile.

Before we left the table Beni arrived - a friend of Dritan. We were introduced and Beni insisted we should have a drink on him. We could stay a few more minutes. Raki and coffee all round.

The raki was superb - smooth, full of flavour and with a delicious aftertaste. I believe it was made with muscat grapes and came from Permet. I made a point of commenting on how good it was and before I realised Beni had ordered a second round.

He also ordered the fruit plate - which we are working our way through in the photograph - and another dessert: jellied oranges and walnuts in a sweet syrupy sauce.

Inevitably he paid for it all.

Definitely time to go now so we headed out. On the way Dritan bumped into another friend and stopped for a chat. We left with Beni who took us across the street to another cafe - his own as it turned out.

Beni disappeared behind the counter and reappeared with a tray of macchiato and yet another round of raki - on the house of course. Dritan turned up. It was time to go. If James and Ryan hadn't had to catch the bus we might still be there.

Thanks Dritan. Thanks Beni.

Anonymous said…
Where is this Floga located?
5:19 pm

olli said…
I'm glad you all appreciate the sacrifices I make to keep this blog going.

Anon, I don't know what street Floga is on. It's a side street off R. Elbasan near the river. Coming from the river its the second (?) street on the left.
7:06 pm

Anonymous said…
"The raki was superb - smooth, full of flavour and with a delicious aftertaste. I believe it was made with muscat grapes and came from Permet."

It seems that you have been totally embraced by the "true" albanian spirit :)

Also, the way you talk about raki is so albanian.
4:25 pm

Rod said…
School will soon be out, summer school ended and I will have plenty of time on my hands.... perhaps it is time for me to invite you for coffee!
6:47 pm

Anonymous said…
Same happend to me.
It started in Tirana (treshi) then (laprak) then (bloku) then (shkoze) then (dajt) then Durres (plazh) finally back in tirana (treshi).
18 hours binge drinking with raki.
Great
Cant wait to go back this summer
9:59 pm

Anonymous said…
how lucky a canadian can be?
living among genuine albanians is always a plus for the foreigners.
me, I am so bad at posing as a foreigner, though albanian at heart. but I am sure that I will be treated fairly different :)
enjoy the sun!
7:55 pm

Anonymous said…
I'm glade that you appreciate our hospitality and especially our RAKI. If you really are a member of the "Raki Funclub", you should definitely try my father's.
Whenever you want give me a sign...
By the way, I saw your friends yesterday outside the newest shop in Bllok: "Apple". I guess they have become VIPs now as people recognize them from your pictures on this Blog. Cool...

olli said…
Rod, happy to meet anytime. You can contact me through the gmail address on the blog and we can sort something out.

Anonymous said…
I loved reading your blog. It gives such a vivid and lively description of life in Albania that it makes me feel like I am there. Have you been there recently?

I was just wondering how is life in Albania different based on gender. Are there certain social events that are male dominated? How easy would it be for a female curious about Albanian culture to travel around there?

Looking forward to your reply!
4:44 am