July 03, 2007
In October 2006 the Albanian parliament announced an international competition to come up with a design for a new parliamentary complex. In January this year ten of the competitors were shortlisted for the second phase. On 28 June the jury made its final decision (only available in Albanian on the Parliament's website for the moment).

The winning submission was made jointly by two Swiss architects, Mario Campi and Fabio Reinhart, and an Albanian architect, Agron Jano. Even though the photographs seem to have disappeared from the webpage containing the official announcement, they are available elsewhere, so here is the winning entry: 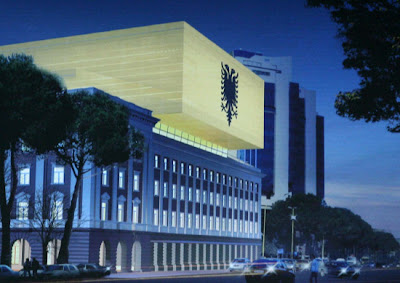 This structure is built onto the Parliamentary complex on Blvd. Dëshmorët e Kombit, one of the two main buildings currently used by the Parliament.

The aim of the competition, as stated in the original announcement is

...to select architectural, urban planning, and spatial ideas and solutions for the New Parliamentary Complex.

The competition aims to create the most functional design possible and deliver an optimal spatial and architectural solution, at a level commensurate with its function, for a dignified presentation of the new work in relation with its homologous institutions and to increase the caliber of the architecture and urban planning of the Capital, and especially its central axis.

While it is difficult to make a judgment from the few photographs that have appeared so far I find it hard to believe that what is proposed will 'increase the caliber of the architecture and urban planning of the capital'.

The building as it currently exists is hardly outstanding, but relative to much of the terrible architecture and design in the city it has its merits. The changes being envisaged don't seem to me to represent an improvement.

The scale of the construction appears to completely overwhelm the older building, and its height is out of keeping with the other buildings on the Boulevard - the University, the Academy of Arts, the Palace of Congresses, the Presidential Residence, the Prime Minister's office, the Pyramid, even the Rogner Hotel.

Unfortunately the Boulevard has already been blighted by the truly ugly Twin Towers, but it seems a shame to move away from the more human scale of the existing structures along the street in pursuit of grand schemes.

On a different note, from the citizens' point of view, grand parliament buildings are never a good idea. Politicians already have too great a sense of their own importance and indispensability. It's not something to be encouraged.

The estimated cost of the project is 30 million EUR and since no international funders are going to stump up the money for this, it could be argued that the Government should be spending those funds on more important projects that benefit the people of Albania.

Anonymous said…
How kan a team of experienced architects decide for such a ugly construction.
It looks like a cheap glas box on a top without any harmony with the old building.

I hoppe the project will be canceled.
The best solution ist to bild a new parlament building somewhere else with a big green garden around.
2:30 pm

An Albanian in NoVA said…
While a new parliament building is needed, this design is hideous.

I have a better idea. Why not knock down that monstrosity (sp?) that people the Palace of Culture and build the new Parliament there. At least there is no way that the new building will look worse than the existing.
4:25 pm

Anonymous said…
The winning project is horrendous. They may change it later on, we wont know for sure. I disagree on the twin towers being "ugly", although out of place they're decent looking.
6:18 pm

Tirana Interior Design Community said…
This is the first photograph I see. More than an innovative idea this looks like the continuation of the Socialist Era idea of the "great Albanian architects" of adding one story on the top of almost every building in Tirana.

I don't see any transition between the existing building and the addition. There is something mentioned about the Parliament being above everything else, as a symbol of the Parliamentary Republic, but I don't see a fully executed concept. Somehow it seems more like an unfinished project if I have to look at the building as a whole.

No way something like this, can set the bar higher for Tirana in the International Arena. I hope I don’t push the envelope when I say this would remind others of what not to do.

Anonymous said…
"The best solution ist to bild a new parlament building somewhere else with a big green garden around. "

I agree with you, that would be the ideal solution. But, there is always a but, if this cheap glass structure is $30 million, who would pay for a white house versaille for us?
For now i think that this solution is much better than the actual building and much better than any other grand scheme. We could use the money in so many other needy areas in the country!
Later we will definitely build a decent new one.
I agree with omit about the twin towers. I can't stand them. What can we do now about them? 'What can we do about the 300 000 illegal buildings in TIrana? We are back to primitive medieval conditions with most of Tirana now with no propoer sewing, drainage, electricity, etc systems. Living like gypsies in calcutta. Even the Romans 2000 years ago were better since there are still remains of ancient Roman acqueducts in Albania. Ironically the Italians picked the samll town of Tirana because it was an empty field with potential for a structured urban city. See you ignorants out there? This is what happens when you think like there is no tomorrow and give up being civilized. I admit that there are a lot of ignorant people with twisted mentality in my country that have less common sense than the normal world citizen.

Hey Shkodra is a flat place with large boulevards. It also used to be our capital in Illyrian times. It would be much convenient to modernize and add new architecture to Shkodra than to the heavely populated mess of crazy people in Tirana.

Alb in nova, I have to disagree with you, the old culture palace, ie the current national library and opera house is one of the most beautiful in in the country. You have many similar ones in Italy and Germany. It is like the columns of ancient Greece, but in a more rational straight form. It's just a simple, beautiful, proportional building.

I don't know about you guys, it seems you haven't traveled at all. In the last 7 years, in the richest cities in the world it is very chic to construct glass and steel additions to old buildings!

My concern is that the twin towers(i can't stand this name, it reminds me of the towers that fell in New York. Did the arab constuctors in Tirana name them on purpose?) are much higher than this new parliement building. Not only do they take away from the importance of the parliament (arabs are higher/more important than the albanian government/representatives of Albanian people?), but someone with a sniper on the tower above can aim at our MPs for example. Or, spy on them.

The new parliament will be clear glass, and hopefully it will make our political class more "transparent".
1:39 am

james said…
ll.t. said it best so far, FUGLY! I expect bad architecture from American cities not European. This is just bad. Maybe after it's built we could spruce it up with a bunch of bright paint in funky designs. That seemed to help the other atrocious buildings in Tirana. This is really a shame. I pray that it doesn't get built.
10:10 am

Unknown said…
I don't know how this constitutes as a design. It's just a block on top of our beautiful parliament. Our Roman style Neoclassical parliament. Why must they destroy everything beautiful in this country? When will real men rise up in this country? When will someone put a stop to the disgusting paints being splattered on our building, the illegal buildings and the communist architects using their connections in the secret police and government to have their designs win?
5:46 am