June 30, 2007
Since the arrival of an Apple store the good people of Tirana have an opportunity to buy over-priced, over-hyped electronic toys. I assume it is the real thing, even though no Apple website I have checked makes any mention of Apple in Albania. 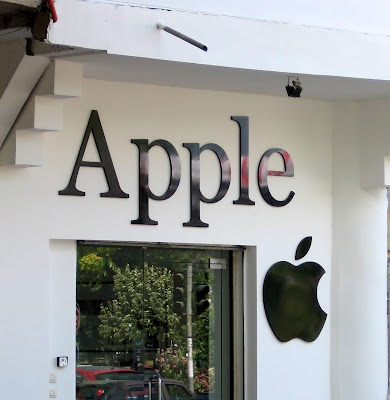 Tirana Interior Design Community said…
I guess there is no people waiting in line for the iphone at this apple store!
8:47 pm

Anonymous said…
it doesn't look like an official store because they all have the same design everywhere and this is not it.

I have to agree with the over priced part.
9:15 pm

Anonymous said…
I think that the prices are not so expensive comparing with europe. It is not any difference between prices in Italy and here.
I am happy, finally an apple store is present here.
6:34 pm

Unknown said…
If the prices are overpriced everywhere than where is the problem? Everyone that have the money can buy it. It is just a choice! I think that is just a new product in Tirana and we have more possibilities to choose. I have to congratulate the person that has brought the Apple products in Tirana and I wish to him a lot of success.
12:45 pm

olli said…
Hi Ami, as someone who doesn't buy apple stuff I have no problem with their prices. It was just an observation.
10:29 am

Unknown said…
I think that was not just a simply observation but was more a negative one. But is true that we have the rights to see the things in diverse ways. :-)
4:38 pm