January 23, 2007
As well as the bigger posters on advertising sites I showed yesterday, the campaign workers have also been out flyposting on any available flat surface. Again, Olldashi's people have been the more active. Unfortunately, nobody seems to have explained to them the number one rule of of political campaigning - don't put a poster of your candidate anywhere near an image of Mickey Mouse. 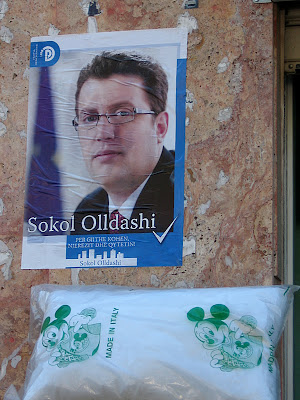 It's not just the leading candidates who are posting. In the last few days I have seen a large number of posters for Dr Edmund Stojku - presumably a candidate for that particular district. 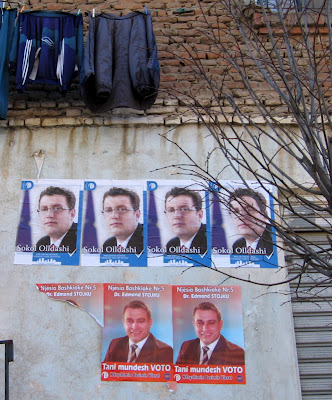 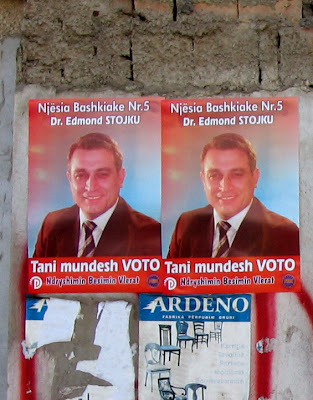 While some have been putting posters up, others have been tearing them down. Dr Stojku's supporters used tape to attach theirs, which makes them very easy to pull down. Mr Olldashi's used paste - it takes more effort to get these off the wall, but someone out there seems to think it is worth the effort. The two defaced Olldashi posters below were part of a line of more than fifty pasted to the wall of a school opposite the American Embassy on Rruga Elbasanit. Every one had been defaced. 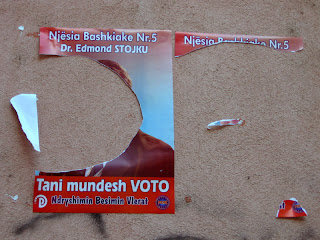 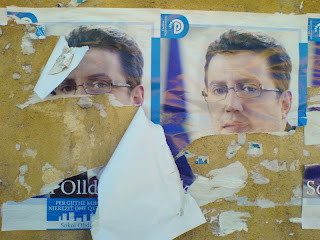 This enthusiasm for defacing the other side's posters is a bit depressing. Even in the highly uncivilised politics of Northern Ireland, election posters were generally left alone. So much so that some of the them were still flapping in the wind, faded and slowly disintegrating, months afterthe election was over.

Ll.T. said…
Thanks for pics Alwyn, you just keep on adding beers to my tab and I'll pay you off once I'm in Tirana :)

As for the defaced posters; unfortunately that has become a political tradition :(

olli said…
Looking forward to it Ll. Regarding the posters, I did notice on a local TV channel that someone had been arrested for doing this, but it doesn't seem to have stopped them.

Anon, their both behind glass (or plastic) for the big posters but I haven't seen any small posters for Rama yet.
7:04 pm