January 31, 2007
A new face appeared on the posters recently. Apparently, this is Nard Ndoka, head of the Christian Democrat Party (PDK), which is more than I knew before some good folks left some comments identifying him. He is not a candidate for mayor, nor does his poster name any other candidate, so I'm not sure what his message is. Thanks to Kim I also now know that he looks like Stephen Harper, the Canadian Prime Minister. 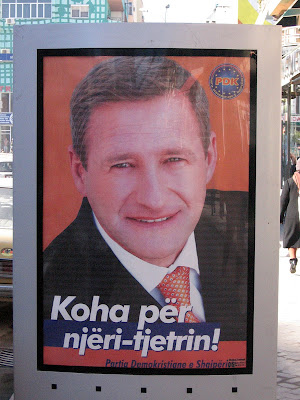 I thought I had found another new candidate when I spotted the poster below from a distance, but up close it turned out to be another poster for Olldashi except that he was being presented as the candidate of the Partia Republikane, one of the Democratic Party's allies in government. Thanks to Adela and Radu for identifying the gentleman in the picture as Fatmir Mediu, leader of PR and Minister of Defence. 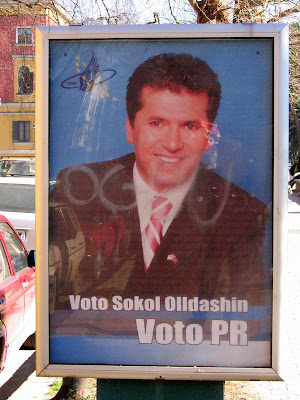 Olldashi's campaign has gone mobile. After seeing the Rama bus on Monday, today I spotted at least one Olldashi bus. 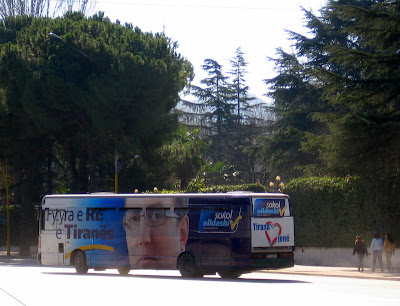 I also saw at least three mobile hoardings for Olldashi - two from PD and one from PR. 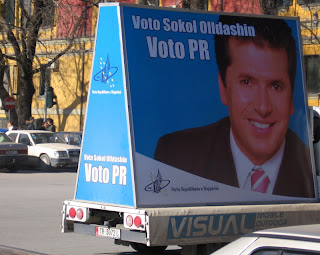 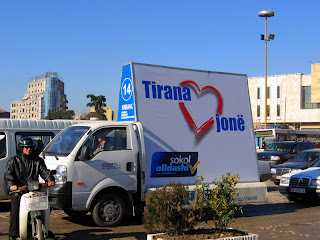 One supporter added his own mobile contribution to the Olldashi campaign. 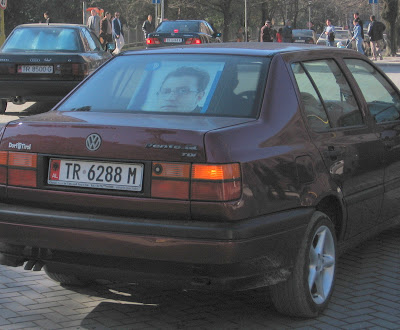 I should point out that I am not campaigning on behalf of Mr Olldashi. It just happens that the PD have been more active in getting their advertising onto the streets. There are more posters of Rama appearing, but not nearly as many as those of Olldashi.Some of these Rama posters appeared by the river and portray the mayor against the background of the greenery by the river and some of the new developments in the city centre - no doubt this is deliberate. 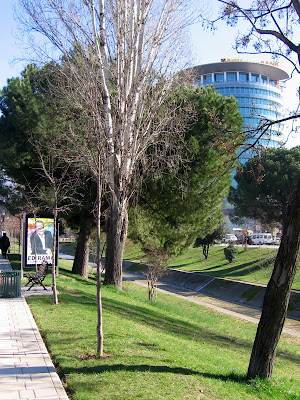 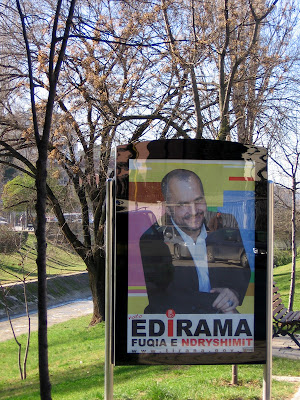 Unofficial supporters of the left have also been active in a rather more negative campaign. 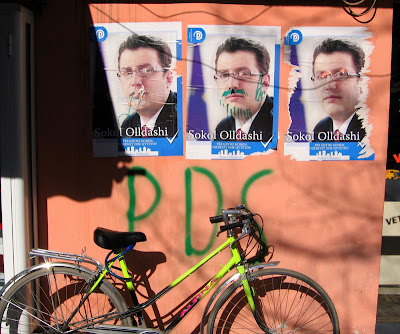 Finally, Mjaft have also been on the campaign trail, encouraging people to vote. One of the posters they are using tries to persuade us that 'voting is sexy'. I imaging they were trying to be humourous, but it just looks tacky. For those who can read Albanian there is a debate about this poster over at Peshkupauje, including a response from Mjaft (in the comments under 'klajdevour'). 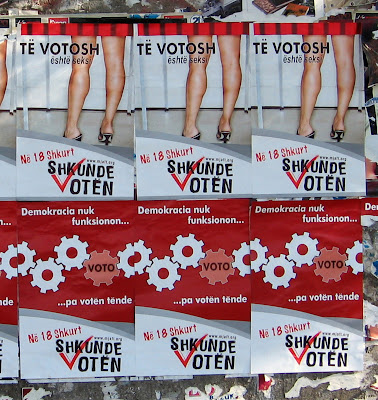 Adela_Radu said…
I think the person in the Voto PR pictures is not Olldashi but the current party leader of Partia Republikane, Fatmir Mediu, who is also the current Minister of Defense. I might be wrong but it looks a lot more like him than Olldashi.
2:59 pm

olli said…
Thanks for the info. I found a picture of Mediu on a NATO website and it looks right. I have now corrected it.
3:58 pm

Borat would approve the MJAFT posters!

Ll.T. said…
Alwyn, there's a post on our site arguing that the Mjaft poster is sexist and shouldn't be used. Try your hand at Albanian and btw, thanks as always for the pic :)
4:30 pm

Anonymous said…
"Shkunde Voten" is a literal translation of "Rock the Vote." I am sure more than one Albanian would think that to be tackier than the endless legs in the picture.
5:02 pm

olli said…
Well Borat did start out as an Albanian.

Llukan, I saw the post this morning before I went out and got the basic story. As soon as I saw the poster I knew it was the one under discussion.

Even if you don't consider it sexist, it is certainly a serious misjudgement by Mjaft. Surely they could have predicted the response?
5:03 pm

Ll.T. said…
Alwyn, for Mjaft's viewpoint check out the answer by Klajdevour, he is the media coordinator for Mjaft.
5:15 pm

Miss Kim said…
I was out walking yesterday when I looked up and almost bumped into that poster of Mediu-- I was so startled because my first thought was "What the heck is Canada's Prime Minister Harper doing on a billboard in Tirana?" They really resemble each other!
6:41 pm

Anonymous said…
The guy on the first poster is Nard Ndoka.
Cool photos Alwyn, seems like voting frenzie these days in Tirana:D
5:10 am

Ll.T. said…
Nard Ndoka is the head of the Christian Democrats; not a candidate :)

Alwyn, did you manage to become an observer?
7:12 am

olli said…
Rock the vote does have a history, though. I know it has been used in the US. But it was a campaign by rock artists and bands to encourage young people to vote.

Lukan, if Ndoka is not a candidate, why are his posters up? As far as I can tell his slogan is Time for one-another. But I didn't see any candidates' names mentioned.

I did sign myself up for observation. I was thinking of going to some of the more distant areas at first, but decided since I am OMIT I should stick to Tirana. I'm not sure if the rules will allow me to take photographs, but at least I will be able to write about it.
8:56 am

Ll.T. said…
Ndoka is part of the "Grand Alliance", the coalition of parties that currently holds power. The "GA" is supporting one candidate (Sokol Olldashi) in the race for the mayor and they have joint candidates for the heads of the city's subdivisions however they're "competing" against each other for votes when it comes to the city "councillors".

It is a complicated system; compromise being the focus vs. simplicity :(
5:30 pm

olli said…
Thanks for the information.

There is no harm in introducing a little bit of compromise into Albanian politics
9:20 pm

Ll.T. said…
My mistake; I meant political horse trading.
5:36 am