The Further Adventures of Dougal

July 28, 2006
Dougal - or Death Wish Dog - as I have now come to think of him, came bounding up to greet us last Sunday. He looked a little scruffy, but it was only when he got up close and shook himself that I discovered he was covered in blood. We dragged him into the yard for a quick clean up and inspection. Our best guess was that he was being chased or was giving chase and tried to get through a gap in a fence that was somewhat smaller than him.
He didn't seem to be in any pain so we left him to go about his business until we noticed that some of his nastier injuries were not healing up properly. So we took him to the vet. After an examination Dr Allmuça sprayed him liberally with something to help his wounds heal up and gave him a few injections.

Since the spray was purple, and since Dougal does not take to having things sprayed on him, and since I was restraining him so that Dr Allmuça could do the needful, both of us ended up with numerous purple patches. 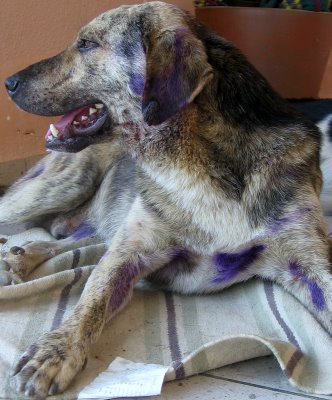 So, if you are in Tirana and you see a dog with purple blotches approaching, don't worry. It's not some horrible new disease; it's probably just Dougal looking for his next opportunity to do something stupid.