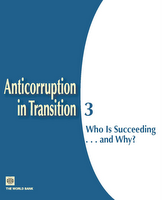 Yesterday, the World Bank issued the latest in their series of studies of corruption in transition countries, covering the period from 2002-2005. It's mostly bad news for Albania. "Albania...has instituted many cross-cutting anti-corruption reforms," but "Albania remains the worst performer among all transition countries."
The problem is not so much the weakness of institutions or the absence of a legislative framework but the absence of strong political leadership. The report, which is based on data gathered before the change of government last year, notes the significance of tackling corruption as a campaign theme:

The new Prime Minister of Albania, Sali Berisha, who took office in September 2005...campaigned on a strong anticorruption platform and pledged that “uprooting corruption will be the first challenge for our new government. In Albania corruption has developed into a sophisticated system, with state capture, fiscal evasion and bribing at dramatic levels.” While not every leader who campaigns on an anticorruption platform necessarily follows through effectively if elected, strong and committed leadership can make a difference, as will be illustrated further in this report.

To my knowledge none of the major agencies dealing with the issue of corruption have produced reports on Albania covering the period since the election of the new government. But on the basis of my informal survey - that is, asking other expats and some locals whether they think there is a greater commitment to tackling corruption - my general impression is that the government is genuinely trying to deal with this issue.

If you want to know more, you can read the full report and the country data for Albania.

Anonymous said…
I would like to ask Our Man in Tirana a question - outside public view on this site. If it would be possible, please e-mail me dunhammassey@aol.com and I'll e-mail you my question. I think it will be a simple YES or NO answer. Nothing complicated - promise! Thanks.
11:06 am